Fr. Marco became the first pastor of St. Mary’s church in September, 1857. He celebrated the first Mass at St. Mary’s on September 18 of that year. Some of the noteworthy events that took place during Fr. Marco’s years as pastor were the building of the “priest-house,” and the formation of the first church committee, a group of men who had various governing responsibilities within the church. Fr. Marco’s responsibilities extended beyond St. Mary’s parish, to include the nearby mission parishes of Alpine, Salem, Dorr, Byron, Wright, and Odessa. During his time as pastor, a small rectory was built next to the church.

Records in the Notre Dame archives tell us that Fr. Marco was not happy at St. Mary’s. In a letter to Bishop Lefevere of Detroit, dated August, 1861, Fr. Marco thanked the bishop for allowing him to leave the parish and mentioned that “last Saturday, a stone was thrown through the window, injuring the opposite wall.” He also asked the bishop to leave the parish “without a priest for 3 or 4 months.” He was succeeded as pastor of the parish by Fr. Ferdinand Allgayer, in 1862.

Fr. Ferdinand Allgayer (alt. sp. Allgeyer) became pastor of St. Mary’s after the departure of Fr. Marco. Like Fr. Marco, he was a young German priest on his first assignment. A letter to Bishop Lefevere of Detroit (from the Notre Dame archives) tells that:

“[Fr. John] DeNeve [of Belgium] is presenting two deacons for the priesthood; they will be ordained tomorrow at Malines. They are [Ferdinand] Allgayer of Ravensberg, Wurtemburg, and [John] Friedland, a Prussion. He hopes they will arrive towards the end of November or the beginning of December.”

Records in the Notre Dame archives show that during this early time in the church, there were tensions between the German people of St. Mary’s and the Irish people living in the outlying areas. One letter from Fr. Allgayer to Bishop LeFevre refers to accusations against Fr. Allgayer for not attending to a “sick Irish woman” in Alpine. Fr. Allgayer referred back to the Bishop’s own instructions that a priest did not need to attend to people who did not supply a conveyance for the priest. According to Fr. Allgayer, the Germans would provide a carriage for him, while the Irish would not.

It was during Fr. Allgayer’s time as pastor that St. Mary’s school was opened, with an initial enrollment of 18 students.

Fr. Beerhorst, the third pastor of St. Mary’s, was also a newly ordained German priest. In his letter of introduction to Bishop Lefevere, Fr. John DeNeve, of Belgium, referred to two priests he was sending to Detroit, Fr. John Busche and Fr. Henry Beerhorst. After references to Fr. Busche, DeNeve wrote of Fr. Beerhorst, “Beerhorst is less talented but will do well among the Germans and the poor Irish. During the summer he ought to be examined by Lefevere of Father Hennaert befor receiving faculties.”

Fr. Beerhorst did remain at St. Mary’s for six years, during which time plans were begun for the building of the present church.

Fr. Ehrenstrasser became pastor of St. Mary’s in 1870. At that time, preliminary plans were already underway to build a new church, which was completed in 1874. (The steeple was added 10 years later).

In 1873, the cornerstone of the current St. Mary’s church building was laid. Some of the documents found intact at the recent reopening of the stone include original papers written by Fr. Ehrenstrasser, as well as newspapers and photographs from that time.

One of the biggest personal contributions made by Fr. Ehrenstrasser to the parish was his purchase of property for the establishment of Mount Calvary Cemetery. This cemetery was owned by St. Mary’s parish until the 1960’s when it was turned over to the diocese.

In 1883, the Grand Rapids diocese was established, with Bishop Richter serving as the first bishop.

Fr. Ehrenstrasser remained at St. Mary’s until the time of his death, in 1886.

During Fr. Schwick’s service as pastor of St. Mary’s, property was purchased for the building of a new school. The school was built in 1891. 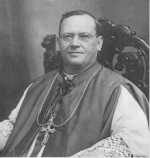 In 1902, Fr. Schrembs (later Bishop Schrembs) went on a tour of Europe. While in Europe, he purchased the grotto of Our Lady of Lourdes, which is still present in the church. He also brought back the “relics of 87 martyrs, as well as a particle of the true cross encased in a large and costly gilded cross.”

When the Grand River flooded in 1904, St. Mary’s school was used as a local relief station. In 1905, a new convent was built for the sisters. Collections were taken up in 1906 for the victims of the San Francisco earthquake.

In 1907, the Golden Jubilee of St. Mary’s was celebrated.

Information about Fr. Vogl is limited. Although he served at St. Mary’s for several years, he did not keep the same announcement books as the other pastors. A note by Fr. Vogl, written in the 1911 book kept by Bishop Schrembs, tells that Fr. Vogl intended to use a looseleaf notebook, instead of the bound books previously used. Unfortunately, his looseleaf books have not been found.

(See photo above) Fr. Schmitt served twice at St. Mary’s, once as administrator, then as pastor.

One of Fr. Riess’ accomplishments during his time as pastor of St. Mary’s was overseeing the remodeling of the church. The front of the church was extended, on either side of the main front door, to allow for more space in the vestibule. Fr. Riess’ announcement to the congregation, on May 18, 1924, tells that the estimated cost for this remodeling was expected to be $15,000.

Fr. Riess remained at St. Mary’s for 20 years, until his death in 1940, making him one of St. Mary’s longest serving pastors.

Beginning in 2012, Bishop Walter Hurley—dealing with a shortage of priests—assigned Fr. Aaron Ferris to St. Mary’s as the canonical administrator. Some of the priests that have followed have also been assigned as “administrators” instead of pastors. The change in title affords the bishop a little bit of flexibility, but the priests still serve the people in the same manner.

Msgr. Stasker was assigned as administrator for St. Mary’s while he was still the pastor at the Basilica of St. Adalbert and St. James (merged). While St. Mary’s maintains its own identity, it is clustered with the neighboring parish to share a priest. To help with the responsibilities, the bishop also assigns a newly-ordained parochial vicar (associate pastor) to serve the communities (and to allow the newly ordained priests to gain valuable experience before being assigned parishes of their own).